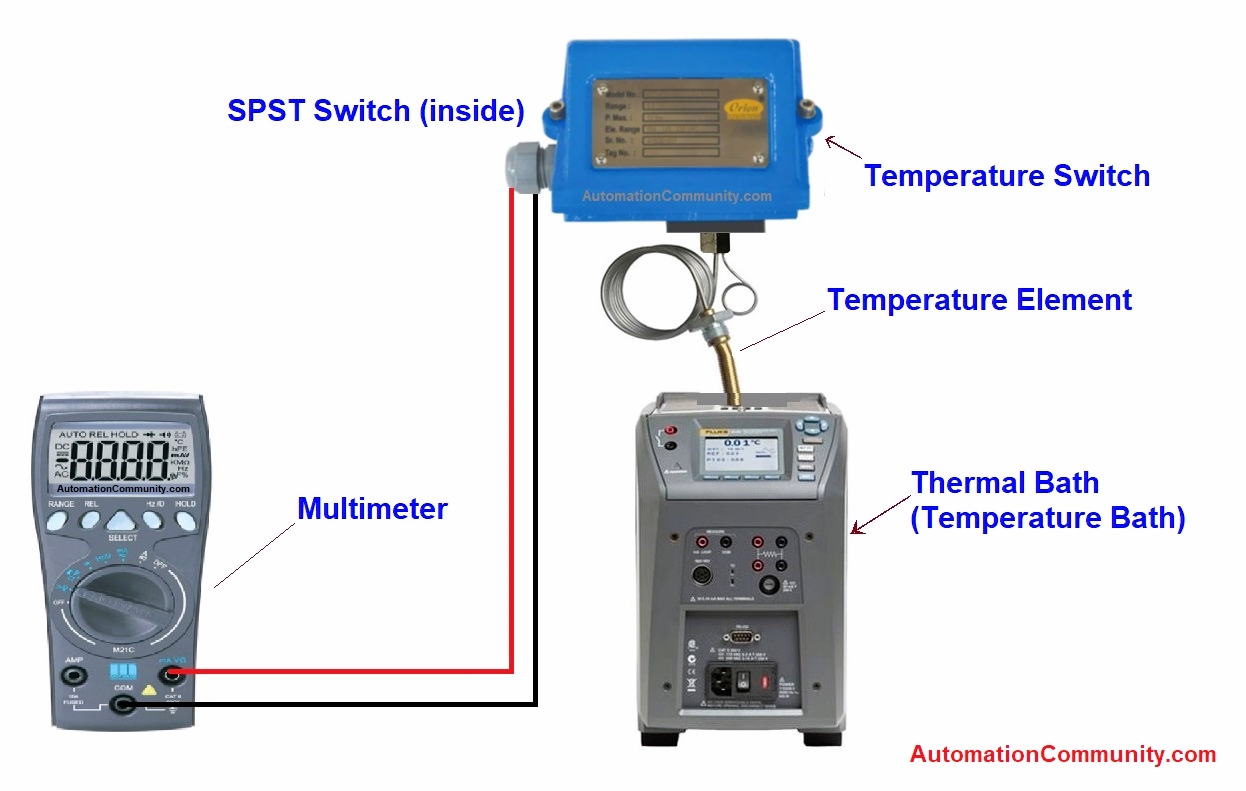 How to do Calibration of Temperature Switch? – Detailed Procedure

In addition, the temperature acts as a reference value for determining the normal heat of the human body, which is used to estimate health levels. Processes such as chemical reactions, industrial processes, and metallurgical operations also require heat.

Temperature can be measured using different types of scales

The Celsius scale – is part of the metric system, sometimes called the “Centigrade scale”. This scale is the most used along with the Fahrenheit scale. On this scale, the freezing point of water is 0° C (zero Degrees Celsius) and its boiling point is 100 C.

The Fahrenheit scale– is the most commonly used temperature scale of measurement in English-speaking countries. On this scale, the freezing point of water is 32° F and its boiling point is 212° F.

The Kelvin scale – is the measure that is usually used in science and establishes “absolute zero” as the zero point, which means that the object does not give off any heat and is equivalent to -273.15° C (Degree Celsius).

The Rankine scale- is the measure commonly used in the United States of America for the measurement of thermodynamic temperature and is defined by measuring degrees Fahrenheit absolute value zero, so it has a negative or sub-zero value.

What is Temperature Switch?

Temperature switches are operated by changes in pressure in the stem (bulb) caused by a rising in temperature. A temperature change will cause a change in the internal pressure of the gas-filled or liquid-filled bulb that is connected to the actuating device by a capillary tube.

This switch arm receives movement from a plunger. On this arm moving contacts are located. On a temperature rise, a fixed contact may open or close the switch.

Temperature-operated switches are usually single-pole single-throw (SPST), and quick-opening, normally open type. A temperature switch can, however, also be a normally closed switch.

Record all the details of the temperature switch, such as

If you don’t have the above-mentioned parameters then refer to the respective instrument datasheet.

The below image shows the calibration setup for a temperature switch. Follow the below diagram and do the setup accordingly.

Take the work permit, and prepare for the job with proper safety PPE.

Inspect the surroundings and visually check the switch for any damage before isolation.

Let the temperature get stabilized when the reading in the thermal bath reaches close to the calibration range.

Usually, by increasing and decreasing the temperature in the bath, check the SET and RESET points. The difference is the dead band.

Document the readings during the calibration.

These steps can be repeated at least 5 to 10 times to check the repeatability.

If calibration is not proper and the switch does not meet the accuracy, do the necessary adjustments.

After completion of the calibration process, install it back and close the work permit.

The term “SPST” in an SPST switch stands for Single Pole Single Throw which includes a single input and a single output. The main function of this switch is to control the circuit by turning it on/off.

Set pressure: It is a pressure from the down to up point at which the contact changes from one state to another. For example, normally open to close state.

Reset pressure: It is a pressure from the upside to the downside at which the contact changes from one state to another. For example, normally close to an open state.

Documentation: calibration information is documented for present and also for future reference.